Batala in Washington, D.C. is part of a larger Batala family created in 1997 by Mestre Giba Gonçalves. Born and raised in Salvador, Bahia in Northeast Brazil, Giba was living in Paris when he first had the idea for creating the band. He opened the band to anyone with an interest in learning the samba-reggae beat, starting off with 60 people.

From Paris, Batala spread to other cities in France, Belgium, and the United Kingdom. In 2003, the band finally made its way back to Brazil by Paulo Garcia, also the founder of Batala Portsmouth in the UK. Composer and musical director, Giba enlisted the help of friends from the various bands and from Salvador in order to create the visual identity of the band. The instruments and clothings are all manufactured in Salvador, Bahia, where the band has a social program that gives jobs to many families. From there they are shipped to the bands around the world.

In 2007, Batala expanded its reach to the United States when Batala Washington became the first band created in North America and also the first Batala band with all female members from its leadership to its members. Today, Batala Mundo (the worldwide conglomerate of Batala bands) has over hundreds of percussionists members around the world.

“I think music has no frontiers. You don’t deny access. It’s like your children, you shouldn’t keep your children for yourself. You should give them to the world.” — Mestre Giba Gonçalves 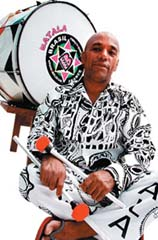